No One's Space (NOS) is a single-player Retro 2D-Science-Fiction-Shooter with modern physics. It was created as a cross-breed of the classic games Wing Commander I and Star Control II. 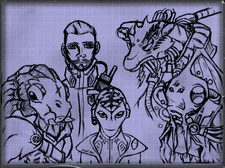 In NOS, the player experiences a cosmic conflict between four powerful races, taking the role of different heroes. In 54 challenging missions, reaching from manageable duels to large combats, the player controls a variety of vessels and has to go all out to improve his skills to master them all.

We are planning to successively release different game modes.The Story and Arcade Mode will be available for the early access release.

The Editor, which will be available as DLC as well, will allow the player to create his own campaigns and missions for the Story and Arcade Mode.